Who says a honeymoon has to include sunshine and palm trees? The only really necessary ingredients for a memorable honeymoon are two people in love …. but a shared interest, hobby or passion makes it even more spectacular. Check out this trip report from clients Tim and Lydia who just returned from a “foodies” dream honeymoon in  Belgium:

Everything went wonderfully, and we got back just in time for Hurricane Sandy.  Here are the highlights of the many things we enjoyed while there:

The Marivaux Hotel: the interior is modern but elegant and since it’s a former cinema, the meeting rooms are named after famous people from movie history.  The room was very spacious for a city hotel, and was comfortable and clean. Breakfast was excellent as well. From the hotel it was an easy 15-minute walk to Grand Place, the museums, and other sites. We like walking a lot and you get to see the sights that way, but there was also a public transit option for people who didn’t want to walk, or if the weather is bad. 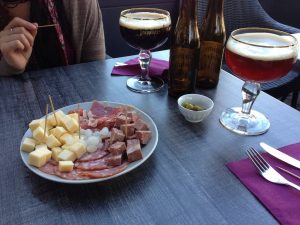 In Brussels we went on a beer tour where we got to try eight different beers, as well as some frites and cheese. One of the stops was at a bar in a quaint old historical puppet theater. The guide was very knowledgeable, funny, and gave us some great advice on the do’s and don’ts of Belgian beers. We also have a new favorite Belgian beer – Tripel Karmeliet.

With the rest of our time in Brussels we went to the Renee Magritte museum, followed some of Rick Steves’ self-guided walks, took in some of the Art Nouveau architecture, and the EU Parliamentarium, which was a surprisingly impressive museum on the history of the EU.   We also made sure to eat lots of Belgian food and had waffles, frites, mussels, carbonnade a la flamande, and tried chocolates from as many of the chocolatiers as possible – Neuhaus, Wittamer, and Pierre Marcolini were the favorites.

Renting the car to head out to the countryside went very smoothly, though we did take an unintentional scenic detour through an industrial bit of Charleroi.

Dinant is a beautiful town on the Meuse River valley. The town is small and quaint. We stayed at the Hotel Ibis. It was more bare bones than the other hotels we stayed in, but did the job. It’s like the “Ikea” of hotels – lower cost, clean, and modern. The best part was its location, it’s right on the river and we had windows right onto the Meuse River. 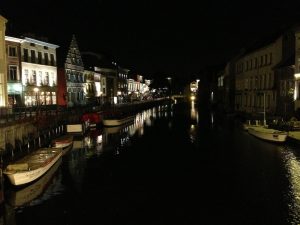 Dinant was a wonderful home base for exploring the Wallonian countryside. It’s a little more off the beaten path for English-speaking tourists, so knowing some French definitely helped.  It was a bit off-season, so there wasn’t a lot going on and it felt a bit deserted at times, but it was relaxing. We took in the views from the Citadel above the town had an excellent dinner at the Jardin de Fiorine that had local game – deer, boar, and wild duck!

From Dinant, we visited two Trappist monasteries that produce beer, Chimay and Rochefort. Some advice for others who make look to go there in the future – it was surprisingly difficult to find the visitor center. Do not follow the signs for Chimay, which lead you to the town center, follow the signs for the Scourmont Abbey. Once you are able to find it, Chimay has a visitor center set up where you can pay 6 euros to see a small museum about the beer and the monastery and get a tasting of a Chimay beer that is only available at that site. We also walked around Scourmont Abbey and got to see the grounds, chapel, and even a few of the monks. There is also a restaurant there where you can sit and sample all of the Chimay beer and cheese. In the town of Rochefort we found a local restaurant to taste the Rochefort Trappist beers and a local specialty, the Jambon d’Ardennes. From Dinant, we also went to the Caves of Han, which were absolutely breathtaking and I would recommend them to anyone who goes to that part of the country. 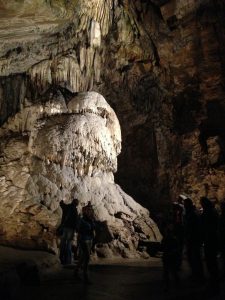 In Ghent we stayed at the NH Ghent Belfort.  The hotel was really nice, modern, and right in the middle of the historic part of the city. For our honeymoon, they gave us chocolates and a very nice room with a great view and alcove.

Ghent is a fairly large city with a big university, so there are a lot of great restaurants. The bicyclists are crazier than any I’ve seen, so we were glad not to have the car still with us.  Once again, we used our trusty Rick Steves guide to wander and learn about the historic sites in the city. In Ghent, we went up to the top of the belfry and visited the Design museum. 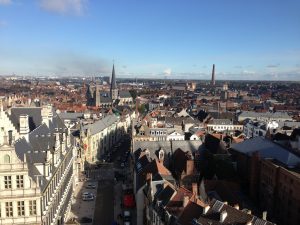 As with the rest of the cities, the food was excellent. The trendy restaurant area is called Patershol, which was a five-minute walk from the hotel and we ate there all three nights. We had amazing meals at Brasserie ‘t Stropke (the lapin a la flamande was unbelievable) and Casa de las Tapas.

From Ghent we took a day-trip to Bruges. Trains run 3-4 times an hour and take only 25 minutes. In Bruges, we again used our Rick Steves and wandered the historic old town and took a boat ride in the canals. He highly recommends the tour of the brewery De Halve Maan. He did not steer us wrong, even if you’ve been on a lot of brewery tours, this one is absolutely worth it.

We finished our trip with a Guinness in the Dublin airport.

Thank you so much for everything!  We’ve already been referring our friends to you and will definitely get in touch with you again if we are looking to plan another escape!