Amy, Kevin and Elle just returned from their first Disney cruise and were nice enough to send me a really detailed trip report. If you’ve every wondered whether this is an experience that your family would enjoy….read on!

We are back–and I am at my desk at school–waking up to 40 degree temps after a week in the Caribbean is tough.  We had an amazing time–if you are considering a Disney Cruise, go. It is worth it!!

We were met at the airport by a driver–so nice to do it this way–we could be on our own time schedule–they had their own loading zone so we could take our time getting her car seat in (which they provided) and our luggage settled.  We drove from Orlando to Port Canaveral (about an hour) to the Radisson.  Awesome hotel–great pool with waterfalls–which was great after traveling all day.  We arranged a shuttle from the hotel to the port ($6 a person–and they do long term parking there if you are driving in). 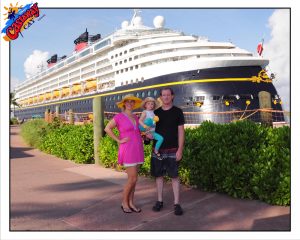 The next morning we took the city bus a few miles down to a Starbucks and a few last minute things at Walgreens. Then we rode to the port and got on the boat (Disney Wonder).  They have a really nice terminal and everything was so easy.  The only line we waited in was to register Elle for the Youth Programs and when we got to the front their computers went down–so they put the band on her and we registered her on the boat that night (took less than 5 minutes). We headed to the buffet for lunch–great food and service there–they had special kid trays so you didn’t have to worry about them dropping a plate.  Plus they had people carrying your stuff to a table for you–with a smile!  We then dropped our bags at our stateroom and decorated our door.  Our room was great–we had a king size bed (it felt like) and then there was a couch that they folded out and prepared every night for Elle. We had an inside stateroom — to me it wasn’t worth paying more for a balcony as we were only in our rooms to sleep–I know Kevin’s parents paid over $1000 more for their balcony and their room was about the same size as ours.    We got dressed for dinner.  Our first night was at The Parrot Cay–a Caribbean-themed restaurant–and met our 2 cool waiters who had things all set up for Elle.  Really good food and it is nice because they bring the kids’ food when you get your appetizer so as soon as they are done eating–we brought Elle up to the kids club while we enjoyed our dinner. She loved going to the kids club.  We went to the Golden Mickeys show–the shows were great because they were only 45 minutes–perfect length for kids. Before the show we met Ariel!

Next morning we woke up in Nassau–we ate breakfast outside overlooking the port–very cool.  We actually didn’t get off the boat at all here.  We stayed on and swam and Elle went to the kids club for a little bit. She also got to meet Anna and Elsa (it was a ticketed meet and greet and I got tickets as soon as we got on board it wasn’t advertised until you got on the boat–which really worked for us since we had no excursions planned). Then she had an accident–swimming in the pool she slipped and split open her chin requiring stitches–very traumatic for me–she of course bounced right back after many tears–we had to meet with the head of security but everyone was so great and kept checking on us to make sure we were ok (luckily we had travel insurance so I filed a medical claim with them this morning!)  We had dinner at Triton’s that night (Ariel-themed)–our waiters had everything Elle liked ready to go–which was prefect.  It was also Halloween night–lots of people dressed up–we didn’t know about it ahead of time–but Elle had her Elsa dress and I wore a blue dress and put my hair in a bun with a crystal headband (and called myself Cinderella).  We kept Elle with us through dinner because she had gotten hurt-glad we did they had special Halloween desserts–a chocolate spider! We went to Toy Story the musical that night–great cute show.

The next morning we woke up at Castaway Cay–amazing.  We loved their beach–everything was clean and calm–there was a cool slide you could go down–you had to be 38 inches tall–Elle just made it–we spent 2 days just hanging out at the beach–we rented a tube to float around in both days and Kevin rented a bike and rode around the island for awhile.  They had wagons and strollers you could borrow to get around which was nice–we saw lots of people bring theirs but we didn’t–Elle hasn’t ridden in awhile so we borrowed a wagon.  This was the most relaxing part of our vacation–we stayed on the beach til it was time to get back on the boat.  The 3rd night was Pirate Party night–again people dressed up!  They gave everyone bandanas in their staterooms so we wore those–we met Donald Duck, Jack Sparrow, Mickey Mouse and did a family picture.  The restaurant had a Pirate parade and everyone paraded and did the limbo–they had special light up cups for the kids. We skipped the show–it was a comedian and we were tired–we did go up to the pirate party–we grabbed a spot next to a dancing block so we got to dance with chip and dale and Minnie mouse–it was kind of long so we didn’t make it until the fireworks. The final night we had dinner at Animators Palette which was so cool–Mickey Mouse came through–and seeing all the art work light up and change colors was very exciting Elle loved it! We met Minnie Mouse on the final night–for some of the best pictures she was finally smiling. 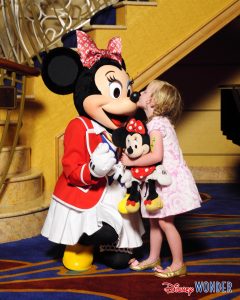 It was so worth it–the experience was very much designed for them.  They made everything easy and everyone was so willing to help and get you what you needed.  If I knew we were going to have a fall break again I would have signed up again!