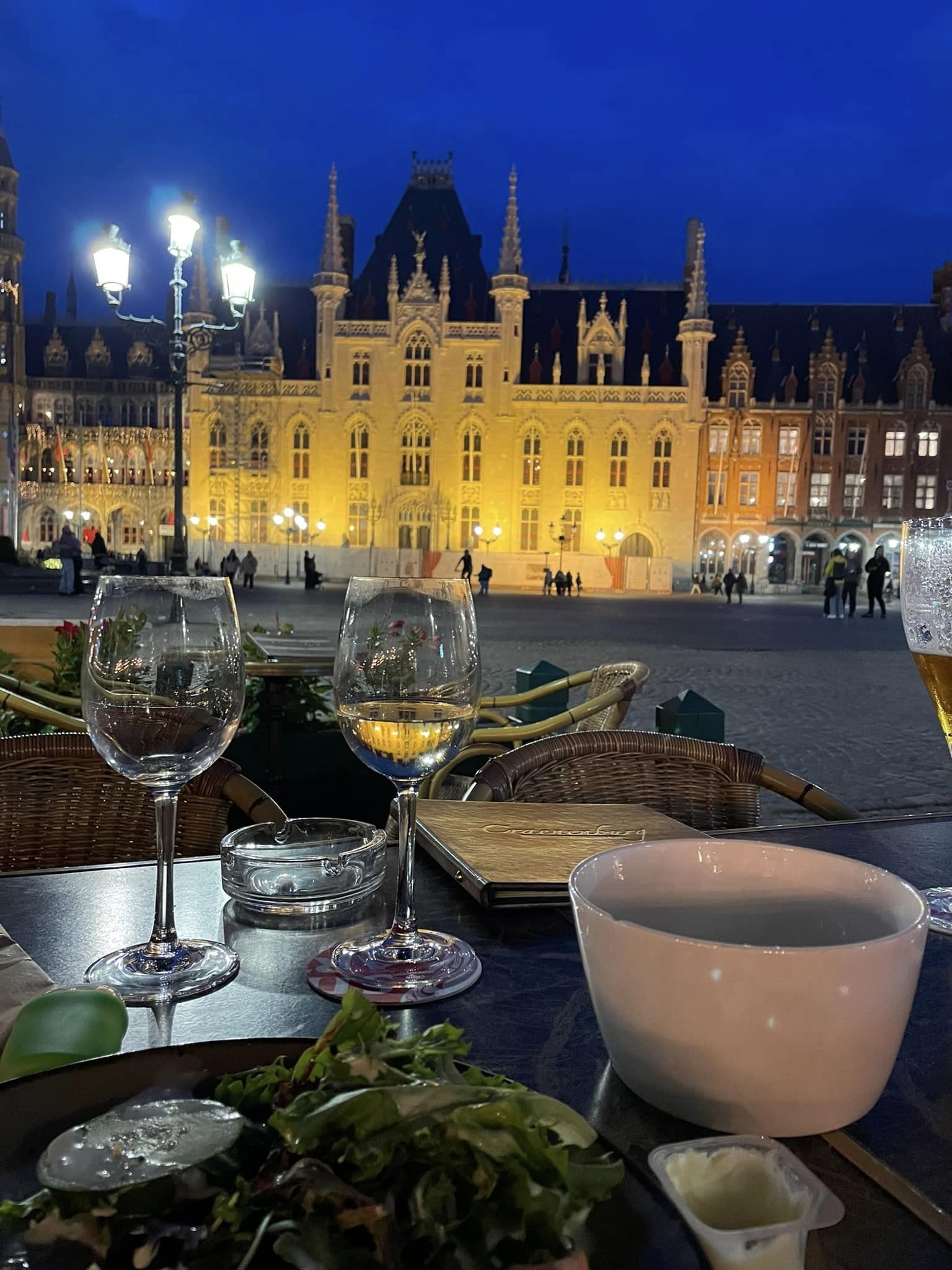 We’ve worked with Beth and Bob on trips for a few years now and it’s always exciting to plan another adventure! Belgium has long been on their bucket list and we finally managed to pull it off. Despite some rainy weather and a head cold, they had an amazing time — which just goes to show, it’s all in the attitude! Here is their review of the long-awaited Belgium, Amsterdam & Paris adventure:

Thank you for planning an amazing, happy-memory-filled vacation for Bob and me! Not one glitch to report. 🙂

The Amsterdam hotel (Park Centraal Amsterdam) upgraded us for free to their tower suite. It had panoramic views of the city (park, canal, street) and was really lovely. The king bed was circular and very comfortable. There was a large soaking tub and large, all-glass shower. And, it was very quiet (a plus in a large city).

The hotel in Paris (Hotel du Louvre by Hyatt) was superb. We opened the window and there was the Louvre! Couldn’t beat the location and the service from the staff was outstanding. Super quiet room and spacious. Immaculate in every way.

The Portinari in Bruges was adorable, themed to The Son of Man with appropriate colors and art on the shower wall plus a bowler hat lamp and large ceramic green apple. It still makes me smile thinking about it. The glass wall and open shower were really unique. This was also a quiet, restful place with a wonderful staff.

In Brussels, the hotel (NH Brussels Grand Place Arenberg) was quiet and the staff was the best of all the ones we stayed at. The included breakfast was plentiful, a wide variety of fresh food, and lovely. The location was just right for us….a short walk from the train station and close to lots of restaurants and shopping. The bathroom needed a makeover and maintenance, but it may have been just our room.

Getting around by the train system was super easy. We had help purchasing the tickets when we needed help. In Antwerp, we got off the train too early, thinking it was our stop and not realizing there were 2 Antwerp stations.

It was a happy mistake: 1) the train station was breathtakingly gorgeous; 2) we were able to grab some snacks to take with us; and 3) the info desk pointed us to the platform where we boarded 20 minutes later for a direct train to Bruges. Our first ticket had us changing trains twice so it was reduced to 1. No problems to report with drivers or taxis.

The flights were uneventful. At Logan, they implemented a change at security where we walked alone by a dog and then didn’t have to do any of the usual security/scanner stuff. No removing items, no liquids check, nothing. The same was NOT true in Paris, where we were back to the old ways and I swear they checked our passports at least 6 times. Even when I purchased a bottle of water in the airport store near the gate, they asked for my passport. At the gate, an agent walked around and asked to see everyone’s passports as we were sitting, waiting for them to begin boarding. We read up on it and it appears to be random, but it’s not helpful when one is tired and sick.

Yes, sick. On day 2 we both developed head colds (not COVID). In Bruges, we stopped at a pharmacy. Then we did everything we planned to do on the trip except eat well. Because we couldn’t taste anything, it seemed pointless and we ate just to eat. To make the best of it, we ate our light meals in the parks so we could people-watch too. We stopped at many chocolatiers in Belgium and I took home a rolling backpack full of chocolate. The congestion lingers so I’ve been staring at the dining room table, waiting for the day I can start to dig in.

What to Do in Amsterdam & Belgium

We did canal rides in Amsterdam, Bruges, and Ghent. With the fall foliage, all were especially pretty. It rained every day during the trip but not constantly or heavily so we timed the boat rides during the breaks.

[Photo Credit: Danielle via Shared Adventures – a view from the canal in Amsterdam]

We saw a college graduation in the Grand Plaza of Brussels, on the steps of City Hall. It was so unique and then the downtown was swarming with happy people.

Our brewery tour in Bruges that would give OSHA nightmares. We loved it; it was fun but a little dangerous.

The cities’ architecture, shops, and streets were all so picturesque and we were content just walking around most of the day.

We downloaded walking tours for Bruges, Brussels, Amsterdam, and Ghent. Bob’s apple watch clocked us at 34 miles before we got to Paris. My running shoes were too broken in so I stopped at a Sketchers in Amsterdam and bought a new pair. That helped for sure.

We felt like we had run a marathon by the time we got to Paris so it was funny (!) that we had difficulty getting to our hotel because of a 10K road race. The taxi driver ended up telling us to get out and walk (because the roads were all detoured). We had to cross the race route twice, with our luggage click clacking on the cobblestones, and working our way up to the hotel. This was the only hotel where our room wasn’t immediately available but they gave us a “salon” to freshen up. It had a shower, sink, toilet, toiletries, towels and wash cloths, robes…very very nice. They stowed our luggage and we walked away from the crowds to the Tuileries, where we settled in for coffees and croissants. And ice cream. Because ice cream helps when you are sick! And it did!

Thanks so much for helping us have such an enjoyable vacation. Yay! We finally made it to Belgium!!