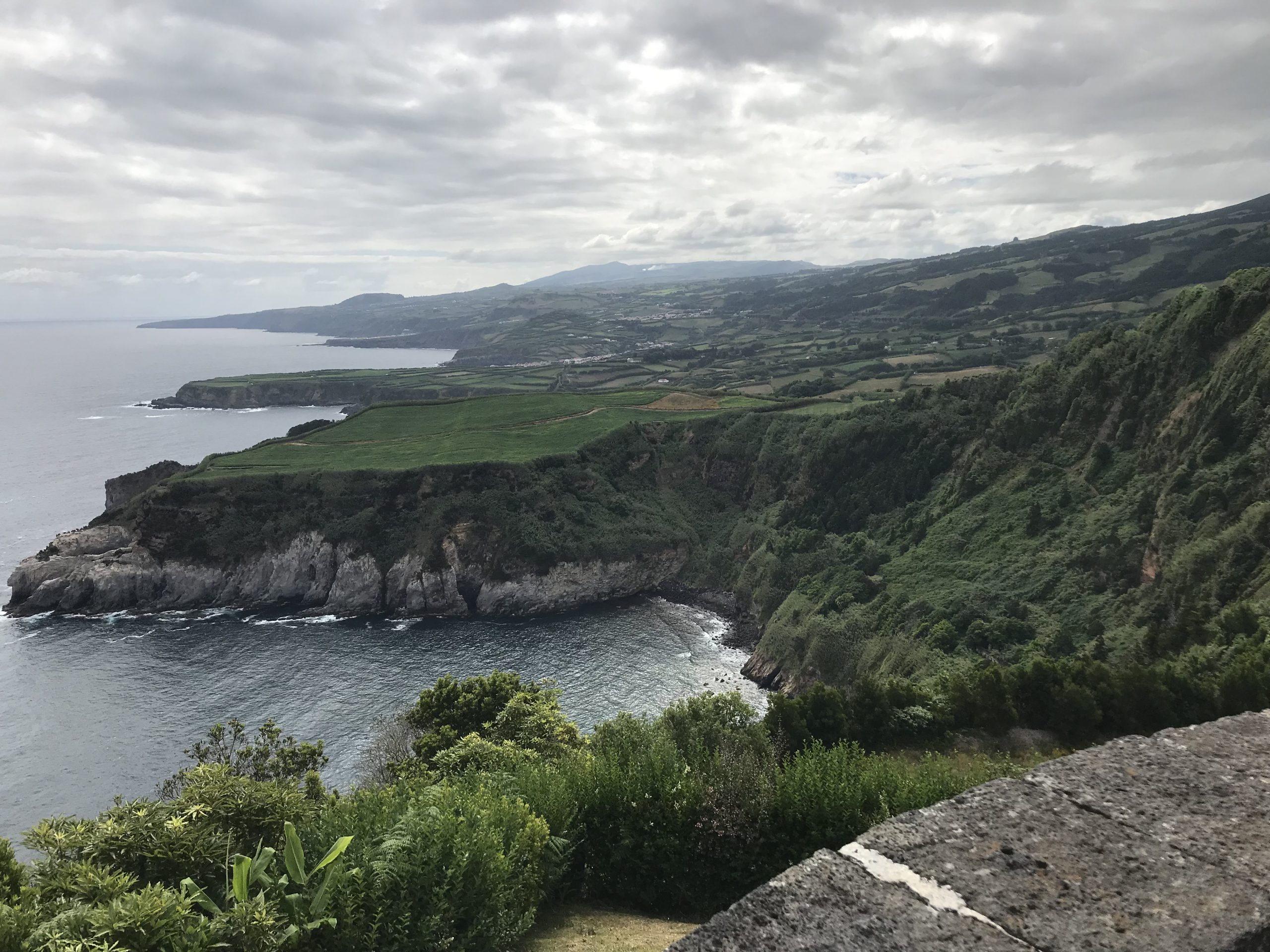 Kendra and Shad honeymooned in Italy, in the Cinque Terre, and wanted a first anniversary trip with a similar mix of scenery, outdoorsy activities, and great food…but without the sweltering Mediterranean heat that had plagued them in Italy. They are independent, and up for an adventure, and I thought the Azores might be just the right spot. Suitably forewarned about how erratic their flights can be (see my trip report from last summer), they decided to give it a try. Sounds like it was a gamble that more than paid off!

Readers’ digest version: Overall, it was a fantastic vacation.  We enjoyed being able to explore almost the whole island, had generally good weather, and ate good (but not great in comparison to Italy) food, and drank delicious and very affordable wine.  The landscape is beautifully wild, and at times driving along interior roads we felt like the only people on the island — far outnumbered by cows.  There were a fair amount of tourists, but it really feels like the island hasn’t yet been spoiled.  Of course, there were some trade offs — restaurant/bar choices seem to be limited outside of Ponta Delgada, but that’s to be expected; and a car really is necessary to explore, since public transportation is limited.  The driving was a bit nerve wracking, but the major roads were maintained really well.

On the logistical side, I had no trouble using the bag I normally do as a carry on for both flights — they were actually a bit lenient on both ends with the weight limit.  Both flights were only 20-30 min delayed, which in my book is on time.  Our flight there was on an older plane, but for a 4.5 hour flight, it really didn’t bother us.  Our flight back was on a much nicer, newer plane with better leg room. Neither had in-flight entertainment monitors, but I usually read or watch Netflix on my phone anyway, so I didn’t miss it.  The flight crew were great both ways, and as far as airplane food and drink go, I would rate SATA pretty highly (far better experience than we had on Alitalia last year).  Checking in and getting through security on the way home was a breeze — we arrived at the check in counter about an hour before our flight was scheduled, and it probably took no more than 15 minutes to both check in and get through security.

The Talisman hotel was great for a one night stay in Ponta Delgada.  Upon arriving, I did realize that the EU plug adapter I brought is grounded (3 prongs), and every outlet we came across was not grounded (2 prongs). We were able to borrow an adapter from Pedras do Mar, but we ended up having to buy one in Furnas.  The room was large and comfortable, and the concierge gave us a great recommendation for a late night dinner (A Tasca).  We explored the city a bit the next day on foot, but didn’t spend a whole lot of time, as it didn’t seem like there were too many points of interest/attractions to see/things to do.

Pedras do Mar was great — the room was large and comfortable (though, I will say the glass wall for the bathroom is a bit odd), with a queen-sized bed, rather than two twins pushed together.  We ate at the restaurant a couple of times (snacks and lunch, and dinner one night), and the food was good.  The bar staff was really friendly and attentive. It was great to be in a self-contained kind of oasis.  The downside, of course, was that we had to drive to anything else, including restaurants. We wished the weather was nicer so we could have taken advantage of the outdoor pool, but we did use the indoor pool and sauna, which was nice. From here, we explored the west side of the island — accidentally doing a 13+ mile hike along/around the Lagoas das Sete Cidades.  I read the map wrong, thinking it was a loop, but it was a point-to-point so we had quite a trek to get back to the car – oops!  Ponta da Ferarria is a must — it was one of my favorite excursions. We also stopped at the Santa Barbara eco resort on our drive one day for lunch — they had surprisingly good sushi, and a great beach you could walk down to.

On our journey to Furnas, we stopped at the Cha Gorreana tea factory, which was really cute.  We really enjoyed our time in Furnas — we liked being able to walk around and take a break from driving.  Hotel Terra Nostra is fantastic, and we enjoyed our dinner at the restaurant our first night.  The staff were very helpful, and were even able to accommodate my husband’s celiac disease with gluten free bread.  It was so relaxing to have access at any time to the botanical garden and hot springs.  The outdoor bar was also fantastic. We went to the Furnas Boutique hotel for lunch one day, and it didn’t particularly impress us.  The space looked nice, and it was a more secluded location, but I would not have traded the botanical garden access and the food at Terra Nostra.  From Furnas, we explored the east side of the island, driving along the coast.  We stopped at Lagoa das Furnas, took a walk through the Jose do Canto Botanical Garden, and of course visited the caldeiras.  Our favorite restaurant on this stretch of our trip was, by far, Restaurante Ponta do Garajau.  They had excellent fresh fish, delicious wine and fantastic service.

Thank you so much for suggesting the Azores — we never would have thought of it and really enjoyed our trip!  I think our next vacation will need to be a bit more relaxing, though — this one was pretty adventure-packed and even with moments of relaxation, pretty tiring (but in a good way).

We are thankful that unspoiled places like this st

Happy #FunFactFriday ! Have you ever tried local m